Lunacy and the Vampire. 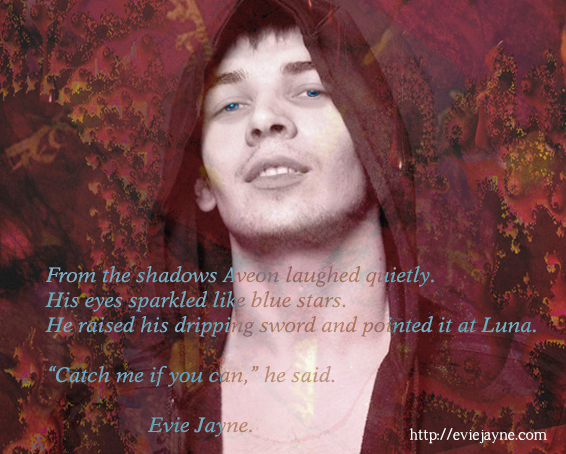 Every myth you ever heard is true. Every monster exists.

Luna Sea Rakshasa inhabits The Dominion, a realm of immortals hidden within the world of humans. She is a Beanne Sidhe huntress, a killer of dark and dangerous things, but she harbors a secret that has been tearing her apart for nearly a thousand years. On the cusp of finally facing the demon vampire who sired her, the last thing she needs is an obsessed vampire who stirs things she would rather not feel.

Aveon Ap Conwy was human before he was found, dying on a battlefield, and turned into a vampire. For a century he has been tormented by the personal war to keep his humanity. Nothing has been stronger until the night he meets Luna. She arouses his deepest hungers, but Aveon knows he must resist his urge to take her...because if he tastes on drop of her blood, they will both be lost.

Thrown together in an unwelcome alliance and fighting the heat that simmers between them, they travel to the mythical domain of Luna's demon sire. As their worlds merge Luna and Aveon become bound by something stronger than lust. Can Luna lay aside centuries of prejudice and open her heart to the only man who can stand beside her in the battle with the vampire king.

Her ears twitched. A sound. So subtle she barely heard it. A dark blur slammed into Cade, driving him off her. She saw a flash of metal, and cold blood sprayed across her face. Cade staggered back, clutching his arm. Red seeped between his fingers. He threw back his head and roared.

From the shadows Aveon laughed quietly. His eyes sparkled like blue stars. He raised his dripping sword and pointed it at Luna.

“Catch me if you can,” he said, before sprinting into the darkness. For a moment Luna sat, stunned and gaping after him.

“You okay?” she asked Cade finally. The big vampire was grinning. The blood running down his arm had already slowed. His wound was beginning close.

“Hell yeah,” he said. “Go get the little shit. Make him bleed for me.”

“Will do,” she said, leaping to her feet and taking off after Aveon. As she ran she considered what had happened. Why hadn't Aveon allowed Cade to take her out of the game? It didn't make sense unless he wanted to face her himself. Or had he simply been protecting her?

As she paced through the labyrinth she kept low to the ground, scanning her surroundings for any trace of him. She found none. She was moving slowly and silently now, her sword drawn and her senses straining. Her neck prickled. He was close, maybe watching her. She peered into the shadows. Nothing, where was he?

“Luna,” his voice was a whisper of sound. She spun on her heel. He emerged from the darkness, his eyes burning with intent. His hands empty of weapons. Luna raised her blade towards him. He barely gave it a glance.

“You won't use that on me,” he said. He looked more than a little savage as he advanced on her.

“Don't count on it,” she said, eying him nervously. “We're still enemies.”

“We're many things, Luna, but not that.” He stepped toward her, laying his hand on the flat of her blade and pushing it away. Why didn't she use the moment to slice his palm, take the advantage?

The sword tip scraped the gravel. With another step he had her backed to the wall. Inches separated them.

“This feels familiar,” he said ruefully.

“I believe it was you against the wall last time,” she said.

“And now the tables have turned. Shall I show you as much mercy as you showed me?” he said. Luna shivered as a chill that had nothing to do with cold ran down her spine.

Without warning Aveon grasped her wrist in a killing grip. Her sword clattered to the ground. He grabbed her other wrist and pinned her hands above her head, easing his body against hers. So savage and yet so gentle. Luna gasped, and Aveon smiled. His fangs glinted between his parted lips.

But the closeness was a cool brand against her body. Her heart thudded loudly in her chest. She knew he could hear it. His eyes were fixed on the pulse point of her neck. His avid gaze burned.

He wants my blood.

“Let go of me.” Luna bucked to free herself. His grip hardened, and her struggles only increased the contact between them.

“Because if you don't I'll make you regret it,” she said.

“There's nothing you could do that would make me regret this.” He leaned forward and ran cold lips down her throat. Fear and lust leaped to life within her. Shivering with pleasure and surprise, she had to fight the urge to throw her head back. Good, it felt too good, and it had been so long.

She'd had lovers in the past, plenty of them. She was nearly a thousand years old after all. In her early years she had experimented as much as the next immortal, but after the first five hundred years or so it had just gotten, well, boring. Without an emotional connection it had become an itch that was less complicated to scratch on her own. And the specter of her father hung over any developing relationship. How could she commit to anything when a monster’s blood ran in her veins and whispered to her to take her lover's neck?

Aveon's hard body pressed against hers, and his lips left a trail of cold fire down her throat. Desire rushed through her. Her small breasts grew heavy, and a wild ache rose within her. Goddess, she was starved for this and hadn't even known it. He groaned and flicked his tongue against her skin. The sound fluttered through her.

Vampire, vampire, she chanted over in her mind, clawing after sanity. Goddess, she had a vampire's lips against her neck, and all she wanted to do was bare it to him.

He'll bite you. She tried to push him away, but couldn't budge him. When had he gotten so damn strong?

He raised his head and stared into her eyes. “Don't deny this, Luna. You know this is right between us,” he said, and Goddess damn it, she did. It felt like coming home. Long forgotten emotions and needs roiled within her.

No! This was not happening. Not now. Not ever. Who did this leech think he was? How dare he make her feel such things?

“I said let-me-go.” Her voice dropped to a low growl, and her eyes narrowed.

“Never.” His eyes burned with a purely male intent, promising wicked things. Possession was stark in his gaze, and he was looking at her as if he'd never seen anything more beautiful. Even as her mind rebelled, her body responded. To be looked at like that. For some unknown reason this crazy vampire had decided she was his.

“Why? I can't Quicken you. I thought you all wanted that,” she said. She thought a look of confusion flickered across his gaze, but was gone before she could be sure.

“I did.” He brushed his fingertips down her cheekbone. Had anyone ever touched her so adoringly, looked at her with such passion? Mesmerizing. She couldn't tear her eyes away.

Aveon leaned closer, slanting his mouth to cover hers. The shock of his lips. So cold, yet she felt delicious heat. A small moan escaped her when he gently brushed his tongue against her lips. Another lap and the breath left her lungs. Without meaning to, she parted her lips, deepening the kiss, his lips cold silk on hers.

She fell, her mind spinning and her body raging in reaction. The ground seemed to shift beneath her feet, and the world spun away. He delved his tongue into her mouth, and after a moment of hesitation she met him. For just one moment all that existed was his mouth on hers, his tongue teasing gently. Her hand snaking up his chest and grasping the back of his neck, she held him to her.


Where else to buy: